The Oak Ridge Institute for Science and Education maintains a comprehensive beryllium exposure studies and testing program for the U.S. Department of Energy that assesses the health effects to workers who have been exposed to airborne beryllium (.PDF, 1.4 MB).

What is beryllium used for?

Beryllium is used in many industries, including aerospace, defense and nuclear weapons production. During manufacturing activities, workers may have inhaled beryllium as dust or fumes, and some individuals may have become sensitized. This sensitization can be an early indicator of chronic beryllium disease, formerly known as berylliosis.

Chronic beryllium disease leads to the development of small, inflammatory nodules in the lungs. These nodules, called granulomas, cause the patient to cough and experience shortness of breath. Chest pains, joint aches, weight loss and fever are other symptoms.

What is a beryllium lymphocyte blood test?

Workers can benefit from the beryllium lymphocyte proliferation test (BeLPT), a key diagnostic tool. The blood test determines beryllium sensitization and helps identify workers who may be at greater risk for developing chronic beryllium disease due to beryllium exposure.

Captured in the Beryllium-Associated Worker Registry, ORISE also collects information from 27 reporting DOE sites on nearly 32,000 workers to assist DOE in the analysis of this health surveillance data focusing on predictive indicators and risk management.

ORISE lab is one of three in U.S. certified to test for sensitization to beryllium

ORISE is a research leader in beryllium studies and is one of three laboratories in the United States that performs the beryllium lymphocyte proliferation test (BeLPT).

ORISE conducted early research on the development of beryllium sensitization and diseases and began performing beryllium exposure testing in 1991. The ORISE Beryllium Testing Laboratory adheres to the regulations and federal standards found in the Clinical Laboratory Improvement Amendments of 1988 (CLIA ’88) and is certified by the College of American Pathologists (CAP). See CAP accreditation #7214435 (.PNG, 32 KB).

A complex medical test, the BeLPT is the primary diagnostic test to determine if workers exposed to beryllium have become sensitized to it. The sensitization can be an indicator of chronic beryllium disease, a treatable but incurable disease. Workers may have experienced beryllium exposure as it is a metal and alloy used in various manufacturing processes.

The laboratory performs the BeLPT according to the U.S. Department of Energy specification DOE-SPEC-1142-2019. Lymphocytes are separated from whole blood, challenged with a beryllium solution, and allowed to incubate for five and seven days. Following the incubation, the cell growth is stopped, and the proliferation rate is calculated. If the cells in the beryllium solution have multiplied significantly faster than the controls, the test is considered to be “abnormal” indicating beryllium sensitization. View the ORISE Beryllium Guide to Lab Results (.PDF, 1.4 MB) for more details on testing results. 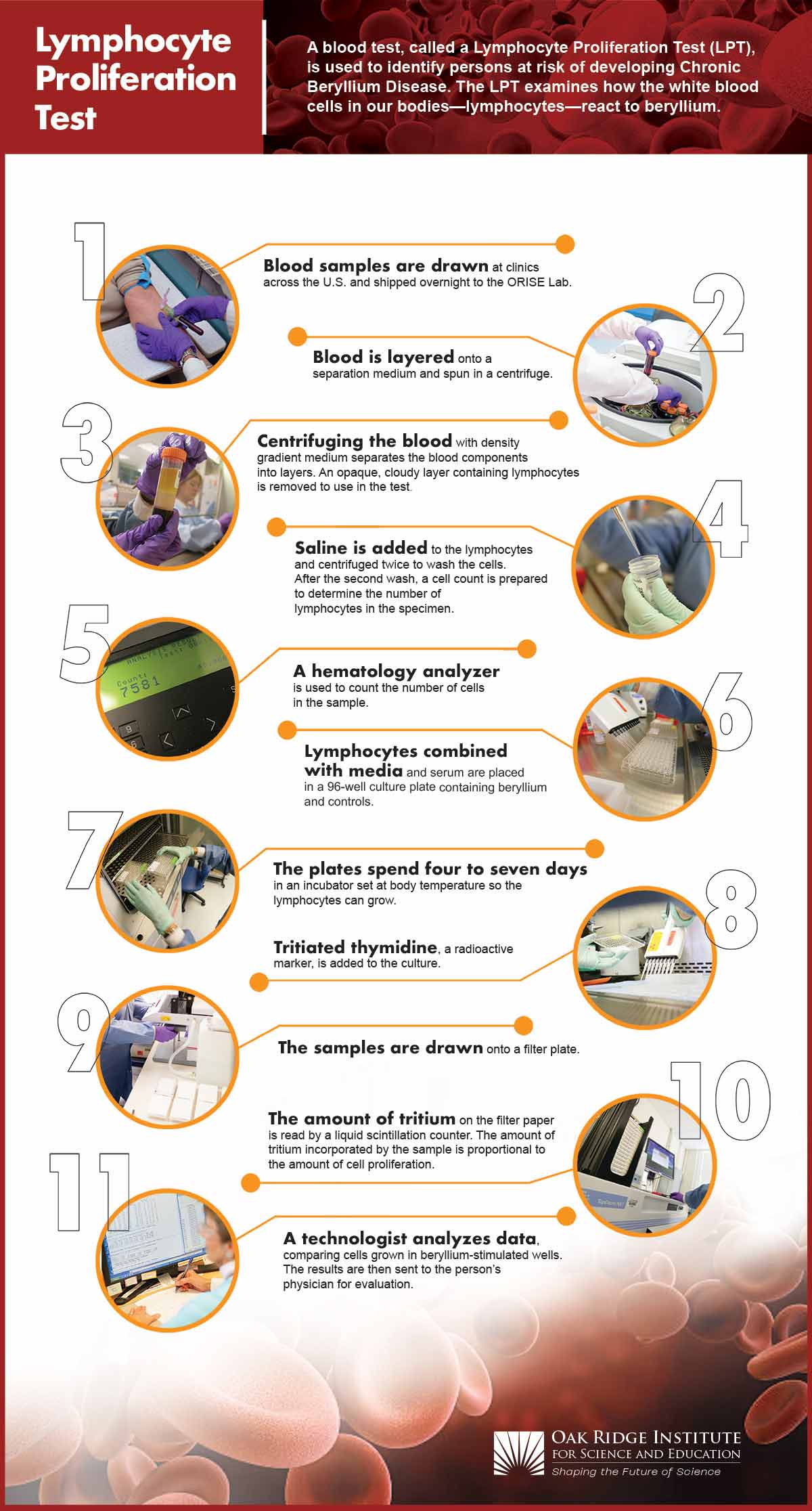 A blood test, called a Lymphocyte Proliferation Test (LPT), is used to identify persons at risk of developing Chronic Beryllium Disease. The LPT examines how the white blood cells in our bodies—lymphocytes—react to beryllium.

Step 1: Blood samples are drawn at clinics across the U.S. and shipped overnight to the ORISE Lab.

Step 2: Blood is layered onto a separation medium and spun in a centrifuge.

Step 3: Centrifuging the blood with density gradient medium separates the blood components into layers. An opaque, cloudy layer containing lymphocyte is removed to use in the test.

Step 4: Saline is added to the lymphocytes and centrifuged twice to wash the cells. After the second wash, a cell count is prepared to determine the number of lymphocytes in the specimen.

Step 5: A hematology analyzer is used to count the number of cells in the sample.

Step 6: Lymphocytes combined with media and serum are placed in a 96-well culture plate containing beryllium and controls.

Step 7: The plates spend four to seven days in an incubator set at body temperature so the lymphocytes can grow.

Step 8: Tritiated thymidine, a radioactive marker, is added to the culture.

Step 9: The samples are drawn onto a filter plate.

Step 11: A technologist analyzes data, comparing cells grown in beryllium-stimulated wells. The results are then sent to the person’s physician for evaluation.

When DOE sought an entity to provide medical screening for former employees of companies which supplied beryllium to DOE, the agency selected ORISE to manage the program. For these employees of beryllium producers no longer in business, ORISE administers a short health questionnaire and a blood test known as the beryllium lymphocyte proliferation test (BeLPT) to determine if a worker has been sensitized to the metal, and can recommend if he or she needs to be evaluated further for chronic beryllium disease (CBD).

If a worker has at least one abnormal BeLPT, he or she is referred for further evaluation through the Energy Employees Occupational Illness Compensation Program, which is administered by the U.S. Department of Labor.

How to Submit Blood Samples for Beryllium Testing 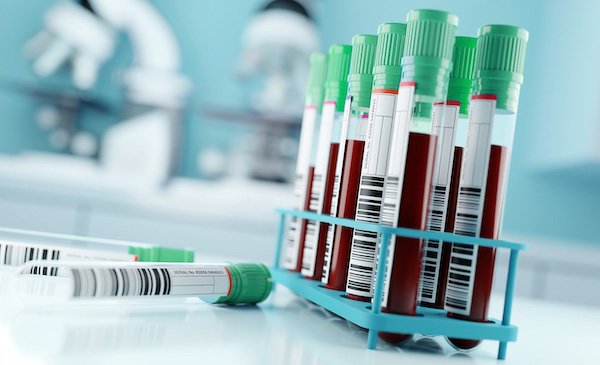 Learn more about the procedure for submitting blood samples to the ORISE Beryllium Testing Laboratory.