During the July-August 2020 launch opportunity, NASA will send an SUV-sized rover to Mars to explore the Red Planet. The rover, weighing in at 2,314 pounds, will take the next step in Mars exploration by seeking signs of habitability at Jezero crater on Mars, as well as the fingerprints of past microbial life itself. The rover derives its power to explore from a Multi-Mission Radioisotope Thermoelectric Generator (MMRTG).

The MMRTG is fueled by plutonium dioxide, a radioactive material that naturally produces heat as it decays. The contrast between this heat and the cold of space creates a temperature difference. Specially manufactured thermoelectric materials within the MMRTG exposed to this temperature difference generate electricity that powers the rover.

That’s where the Radiation Emergency Assistance Center/Training Site (REAC/TS) gets involved. REAC/TS is a U.S. Department of Energy (DOE) and National Nuclear Security Administration (NNSA) asset, and  coordinates with DOE/NNSA, and NASA in providing the specialized knowledge that the medical community and emergency planners in the area around the Kennedy Space Center would need to respond in the unlikely event of a launch anomaly.

Federal, state and local agencies prepare thoroughly in advance of such launches to ensure their readiness to respond in case of an accident.

For this reason, REAC/TS will send one health physicist and one physician to Kennedy Space Center next summer to be on-site support in the case of a radiation emergency, explained REAC/TS Health Physicist Mark Jenkins, PhD, CSP.

“Since there are radioactive materials involved, our role is to support the education and outreach for the medical assets and emergency planners in and around Kennedy Space Center,” said Jenkins.

In addition to being on-site at the launch, members of the REAC/TS team have spent the last year and will spend part of next year delivering medical courses to healthcare providers, hospital personnel, and emergency responders, including fire and emergency medical services, local to the launch site. During REAC/TS courses, healthcare providers and first responders become familiar with the medical management of a radiation emergency. Most importantly, the course participants learn about the MMRTG’s design and the specific potential hazards associated with this part of the rover.

“The MMRTG presents virtually no hazard as long as it stays intact,” explained Jenkins. “The risk associated with it is highly unlikely, but due diligence says you prepare and everyone understands that.”

Angie Bowen, MPS, RN, NRP-IC, REAC/TS nurse/paramedic, reiterated the NNSA and NASA assessment that the risk of radiation contamination from the launch is low. A series of low-likelihood events would have to occur for the plutonium dioxide fuel to become a concern.

“We’re really only worried about the plutonium if it becomes aerosolized and gets inhaled, ingested, or deposited in a wound. Skin is enough to shield the alpha emissions from plutonium, and intact skin is a good barrier to prevent internal contamination if the radioactive material gets on the skin. However, we worry about internal contamination if the material has another route into the body,” said Bowen. 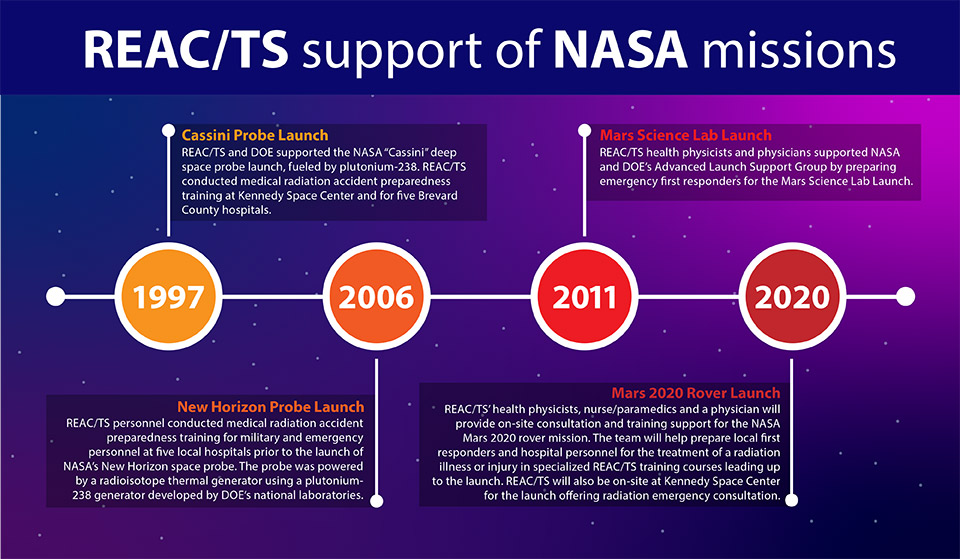 REAC/TS and the DOE/NNSA have been involved with NASA missions since the Cassini probe launch to Saturn in 1997. Support for the launch of Cassini, also fueled by plutonium dioxide, involved REAC/TS educational courses for the medical community and presence at Kennedy Space Center during the launch window.  REAC/TS was also involved in delivering these specialized courses for the medical community in preparation for the 2006 launch of the New Horizons spacecraft to Pluto, and again, in 2011 for the Mars Science Laboratory launch.

While scientists, engineers, and the abundant experts at NASA and Jet Propulsion Laboratory (JPL) focus on a successful, and safe launch, the REAC/TS team applies their expertise by educating the medical community and providing support to the Brevard County Emergency Operations Center, Kennedy Space Center Occupational Health staff, the Cape Canaveral Air Force Station, and the Environmental Health teams supporting the mission.

“The MMRTG adds a complexity to the launch that healthcare providers around Kennedy Space Center community do not deal with all the time. Since the MMRTG launches are infrequent, the educational refresher they get on the radiological aspects are important because they don’t deal with radiation risks and contamination on a routine basis,” Bowen added.

REAC/TS has trained personnel at three medical centers and two EMS systems in 2019, in preparation for the Mars 2020 launch. They plan to return to Florida several more times between 2019 and the 2020 launch window to continue regional educational courses for healthcare providers, emergency planners and first responders.

“If we get to a hospital system where no one knows anything about the medical management of radiation-related accidents, there will be fear. A lot of this education is about eliminating the fear,” said Jenkins. “You eliminate fear by gaining knowledge.”