Radiation is energy that comes from a source and travels through some material or through space. Light and heat are types of radiation. The kind of radiation discussed on this site is called ionizing radiation because it has enough energy to remove an electron from an atom, making that atom an ion.

Radiation is energy, in the form of particles or electromagnetic rays, released from radioactive atoms. The three most common types of radiation are alpha particles, beta particles, and gamma rays. 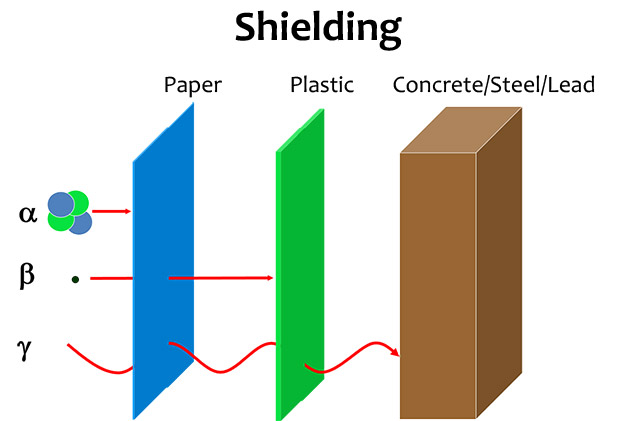 The following list provides a selection of general terms that are used to describe aspects of radiation.

Alpha particle
A Energetic helium nuclei (two protons and two neutrons) emitted by some radionuclides with high atomic numbers (e.g., plutonium, radium, uranium). It has low penetrating power and short range. Alpha particles will generally fail to penetrate the skin. Alpha-emitting atoms can cause health effects if introduced into the lungs or wounds.
Atom
The smallest piece of an element that cannot be divided or broken up by chemical means.
Background radiation
The radiation in man's natural environment, including cosmic rays and radiation from the naturally radioactive elements, both outside and inside the bodies of humans and animals. It is also called natural radiation. Man-made sources of radioactivity contribute to total background radiation levels.
Becquerel
The SI unit of activity 1 disintegration per second; 37 billion Bq = 1 curie. (See conversion factors in the Measuring Radiation section.)
Beta particle
A small particle ejected from a radioactive atom. It has a moderate penetrating power and a range of up to a few meters in air. Beta particles will penetrate only a fraction of an inch of skin tissue.
Controlled area
An area where entry, activities, and exit are controlled to help ensure radiation protection and prevent the spread of contamination.
Cosmic rays
High-energy radiation that originates outside the earth's atmosphere.
Contamination
Deposition of radioactive material in any place where it is not desired, particularly where its presence can be harmful.
Curie
A unit of measure used to describe the amount of radioactivity in a sample of material.
Decontamination
The reduction or removal of contaminating radioactive material from a structure, area, object, or person.
Detector
A device that is sensitive to radiation and can produce a response signal suitable or measurement or analysis. A radiation detection instrument.
Dose
A general term for the quantity of radiation or energy absorbed.
Dose rate
The dose delivered per unit of time. It is usually expressed as rads per hour or in multiples or submultiples of this unit such as millirads per hour. The dose rate is commonly used to indicate the level of hazard from a radioactive source.
Dosimeter
A small, pocket-sized device used for monitoring radiation exposure of personnel.
Electromagnetic radiation
Types of electromagnetic radiation range from those of short wavelength, like x rays and gamma rays, through the ultraviolet, visible, and infrared regions, to radar and radio waves of relatively long wavelengths.
Exposure
A quantity used to indicate the amount of ionization in air produced by x- or gamma-ray radiation. The unit is the roentgen (R). For practical purposes, one roentgen is comparable to 1 rad or 1 rem for X ray and gamma radiation. The SI unit of exposure is the coulomb per kilogram (C/kg). One R = 2.58 x 10-4 C/kg.
Gamma rays, or gamma radiation
Electromagnetic radiation of high energy. Gamma rays are the most penetrating type of radiation and represent the major external hazard.
Geiger counter or G-M meter
An instrument used to detect and measure radiation.
Gray
The SI unit of absorbed dose; 1 gray = 100 rad
Inverse square law
The relationship that states that electromagnetic radiation intensity is inversely proportional to the square of the distance from a point source.
Ionization
Production of charged particles in a medium.
Ionizing radiation
Electromagnetic (X-ray and gamma) or particulate (alpha, beta) radiation capable of producing ions or charged particles.
Irradiation
Exposure to ionizing radiation.
Monitoring
Determining the amount of ionizing radiation or radioactive contamination present. Also referred to as surveying.
Rad
The unit of radiation absorbed dose.
Radiation
Energy traveling through space.
Radioactivity
The spontaneous emission of radiation from the nucleus of an unstable atom. As a result of this emission, the radioactive atom is converted, or decays, into an atom of a different element that might or might not be radioactive.
Rem
A measure of radiation dose related to biological effect.
Roentgen
The unit of exposure from X or gamma rays (see types of radiation exposure).
Sealed source
A radioactive source, sealed in a container that has sufficient mechanical strength to prevent contact with a dispersion of the radioactive material under the conditions of use and wear for which it was designed.
Sievert
The SI unit of dose equivalent; 1 Sv = 100 rem.
X-rays
Penetrating electromagnetic radiation whose wavelengths are shorter than those of visible light.