Growing up in the Midwest, more than 1,000 miles from the nearest ocean, did not deter Augustus Pendleton from his fascination with these immense bodies of water. “Everything from tide pools to the deep sea seemed more fantastic than real,” Pendleton recalled. 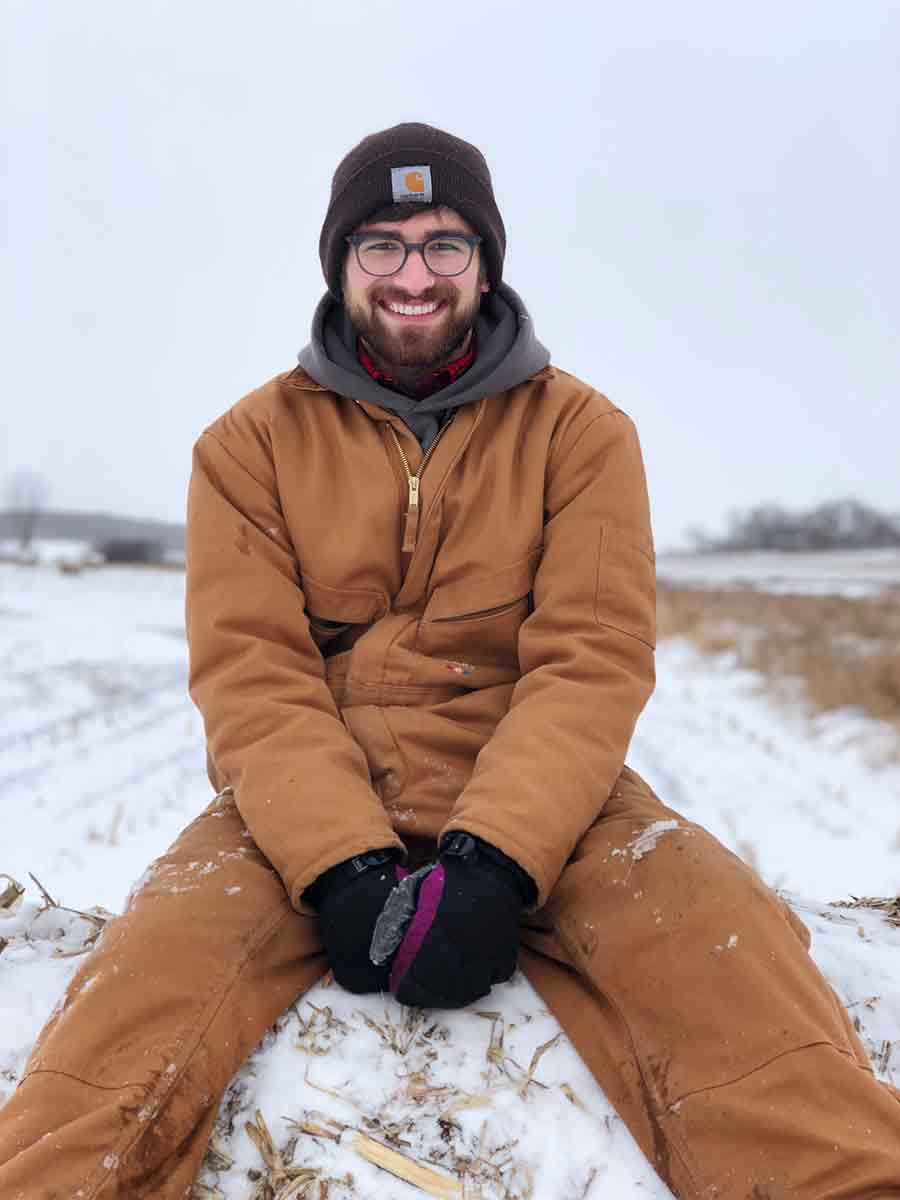 As part of the U.S. Department of Energy (DOE) Scholars Program, Augustus Pendleton studied ways to help reduce the nation’s carbon footprint at DOE’s Bioenergy Technologies Office. Pendleton is pictured here sitting on a bale of corn stover (elements remaining after most of the corn is harvested), one example of a feedstock that BETO is exploring how to convert efficiently into clean energy.

Pendleton, who received a bachelor’s degree in microbiology from the University of Minnesota, Twin Cities, wanted to use his study of science to better understand ocean habitats and the threat posed by climate change.

“I felt microbiology would be a cool lens through which to study this environment,” he said. “I specifically wanted to focus on how microbiology, and science as a whole, can improve our lives while reducing our carbon footprint, whether through energy production, agricultural reform or food production.”

At the U.S. Department of Energy (DOE)’s Bioenergy Technologies Office (BETO) in Washington, D.C., Pendleton found himself where he wanted to be – at the intersection of critical policy and cutting-edge science. Here, mission-critical work is carried out in DOE national laboratories, and Pendleton was able to focus on his passion.

“The accumulation of carbon dioxide in our atmosphere is the single largest anthropogenic threat facing the planet,” he said. “The research funded by BETO helps produce clean energy from natural feedstocks in the most efficient ways possible. This can help reduce carbon dioxide emissions, and, at the same time, help ensure American energy independence by reducing reliance on international fossil fuels.”

“My time at BETO was a huge learning experience,” he said. “I was able to network and learn from a wide range of researchers, administrators, industry leaders and legislators. Listening to their stories and advice was a formative experience in planning my own career path.”

Pendleton used his experience from BETO in his move to Ireland as a Fulbright Student where he studied community management of the Irish seaweed resource. He has since earned his master’s degree in coastal geography.

“My time at DOE predicated my success,” he said. “Finding, synthesizing and explaining scientific and technical reports was essential during my internship, and developing these skills was hugely helpful when writing my master’s thesis.”

Pendleton encourages others to apply. “Be confident reaching out to potential mentors and finding out how you can fit into one of DOE’s projects,” he said. “And once here, be fearless in networking. You learn something new with every conversation, and people are usually generous in sharing their experience and knowledge with their researchers.”

He adds, “DOE is such a massive and influential organization, and I found myself constantly surprised by the diversity of research projects DOE manages. Whatever your interests, background or skills, there is likely a good fit for you at DOE.”

The DOE Scholars Program is administered by Oak Ridge Associated Universities (ORAU) through the Oak Ridge Institute for Science and Education (ORISE) under an agreement with the U.S. Department of Energy (DOE).