Through the management of numerous worker health registries, the Oak Ridge Institute for Science and Education provides support to the U.S. Department of Energy and other agencies in the assessment of workforce health and safety trends. This robust collection of worker health data includes yearly updated analyses of the information as more records are added to each database.

Information from millions of occupational health and exposure records can help DOE set future policy and determine how to address emerging issues or concerns. These databases, managed through ORISE’s worker health data center, also include information that can be studied by researchers and viewed by workers and the public.

Learn more about these databases their unique capabilities:

ORISE maintains the Beryllium-Associated Worker Registry (BAWR) by collecting data from 26 active reporting organizations on nearly 38,000 workers. ORISE assists DOE in the analysis of these data focusing on predictive indicators and risk management. The beryllium registry is under the auspices of DOE’s Office of Environment, Health, Safety and Security (AU-13).

The enactment of the U.S. Code of Federal Regulations (CFR) Title 10, Part 850—Chronic Beryllium Disease Prevention Program; Final Rule in December 1999 (.PDF, 398 KB)—mandated this beryllium registry. The rule addresses the uncertainty concerning the degree of protection provided by exposure limits. To help reduce this uncertainty, the rule requires reporting of data that will allow for epidemiologic analyses of exposure and health outcomes. Reports are provided to the participating organizations and to DOE staff.

The DOE BAWR contains data by year for workers, including:

Through the Comprehensive Epidemiologic Data Resource (CEDR), ORISE provides educators and independent researchers with access to de-identified data collected on its workers and other populations exposed to radiation since the U.S. Department of Energy’s early production years. CEDR’s holdings include 80+ studies of more than one million workers. Access to these data is at no cost to the user because DOE recognizes the benefits of data sharing and supports the public’s right to know about worker and community health risks.

Most of CEDR’s holdings are derived from epidemiologic studies of DOE workers at many large nuclear weapons plants, such as Hanford, Los Alamos, Oak Ridge National Laboratory, Savannah River Site, and Rocky Flats. These studies identify cause of death and patterns of disease among workers to determine if occupational factors contributed to the risk of developing cancer and other illnesses. In addition, many of these studies have radiation exposure measurements for individual workers.

As an important part of its mission of safety, the U.S. Nuclear Regulatory Commission operates the Radiation Exposure Information and Reporting System (REIRS), a database containing all occupational radiation exposure records that have been submitted to the NRC under 10 CFR Part 20. Supporting the NRC in this critical role is ORISE, which has managed this extensive database since 2004. More than 150,000 radiation exposure records are collected and processed annually.

ORISE provides NRC with a full spectrum of services:

REIRS dates back to 1969 when licensees of the Atomic Energy Commission were required to report radiation exposure data for individual workers at the end of employment and exposure summaries for sites on an annual basis. In 1994, the NRC began requiring annual radiation exposure records for every monitored worker. Today, this extensive database encompasses more than 1,800 NRC licensees and contains more than five million records representing more than one million monitored individuals.

Additionally, the NRC and DOE have an interagency agreement to share information and computer systems for this project.

Worker protection is a priority for the U.S. Department of Energy. A key safety focus is protecting the health and safety of those who work at DOE facilities that use radiation for research and other scientific endeavors. DOE’s Radiation Exposure Monitoring System (REMS), managed by ORISE, is a critical component in the ongoing analysis of data that can help inform vital decisions for DOE’s occupational radiation protection regulations as outlined in Rule 10 CFR 385.

The REMS database provides a means of tracking individual radiation exposures to ensure that exposure limits are not exceeded and that DOE continues to keep worker exposures as low as reasonably achievable. REMS contains data on more than 500,000 unique workers and more than three million radiation records. This includes radiation monitoring data for all DOE employees, contractors, subcontractors and members of the public in areas that require monitoring. The REMS project began in 1969, but some individual exposure records date back as far back as the 1940s. The system contains records for all monitored individuals since 1986.

To keep this database current, ORISE annually collects and processes more than 100,000 exposure records from 98 organizations that report data for more than 30 DOE sites. Key indicators derived from this database are analyzed for trends that are then published annually in the Occupational Radiation Exposure Report that ORISE provides to DOE.

DOE also has an interagency agreement with the U.S. Nuclear Regulatory Commission (NRC) to share information and computer systems for this project.

Through the Comprehensive Epidemiologic Data Resource (CEDR), ORISE provides educators and independent researchers with access to de-identified data collected since the U.S. Department of Energy’s early production years. Learn more about how CEDR provides access to data from DOE epidemiological studies to researchers and other interested stakeholders. 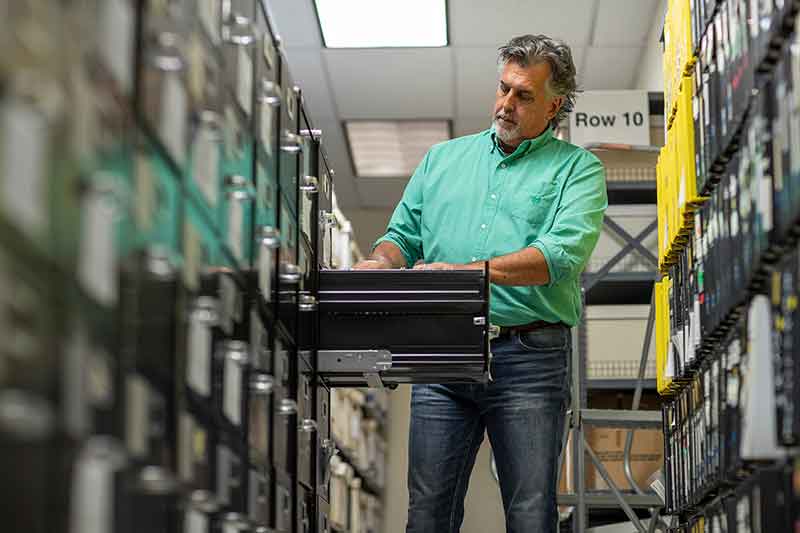